• The stock market went on a wild ride this week, with the first three days of trading finishing well in the red before rebounding to post some green numbers on the last two days

• But it could have been worse, as all the major U.S. indices were down more than 3% through Wednesday, before they each rallied more than 2% on Thursday and Friday

• For perspective on the volatility, consider that the small-cap Russell 2000 was down 6% through Wednesday and gained more than 4% on Thursday and Friday

• Only 3 of the 11 S&P 500 sectors were positive and those were only up less than ½ of 1%, as Consumer Staples, Financials and Materials ended the week green

• Consumer Discretionary (-3.7%) and Information Technology (-2.2%) were the two worst performers as money continues to flow into the more cyclical and value names

Why was Wednesday especially bad for markets? Well it happened to be the same day that the Labor Department reported that core (excluding food and energy) consumer prices jumped by 0.9% in April, the most in nearly four decades and roughly 3x consensus estimates. Further, the Consumer Price Index rose 4.2% over the 12 months ended in April, exceeding the 3.6% forecast. Then on Thursday, it was reported that Producer prices rose 0.6%, about 2x expectations.

Stocks recovered some on Thursday, helped by a bigger-than-anticipated drop in weekly jobless claims. And on Friday, it was reported that retail sales were flat for the month and that news seemed to encourage traders too.

On Wednesday, the U.S. Bureau of Labor Statistics reported that the Consumer Price Index for All Urban Consumers increased 0.8% in April on a seasonally adjusted basis after rising 0.6% in March. In addition, over the last 12 months, the all items index increased 4.2%. This is the largest 12-month increase since a 4.9% increase for the period ending September 2008.

Here are a few highlights from the release that caused Wall Street to sound the inflation-alarm:

• The index for used cars and trucks rose 10.0% in April. This was the largest 1-month increase since the series began in 1953, and it accounted for over a third of the seasonally adjusted all items increase.

• The food index increased in April, rising 0.4% as the indexes for food at home and food away from home both increased.

• The energy index decreased slightly, as a decline in the index for gasoline in April more than offset increases in the indexes for electricity and natural gas. 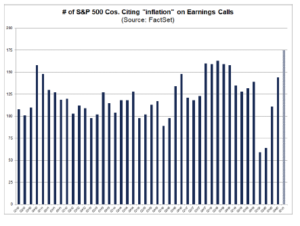 And this just happens to be the highest overall number of S&P 500 companies citing “inflation” on earnings calls going back to at least 2010 (using current index constituents going back in time).

The previous record was 163 and since almost 50 companies have yet to report Q1 results, it’s likely that the number will grow even more. 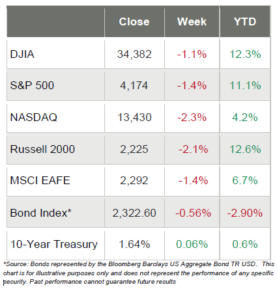 Inflation Drags Down the Markets

As soon as the opening bell rang on Wall Street Monday morning, stocks headed south as traders further analyzed the previous Friday’s weak jobs reports and as worries about higher inflation and the impact on corporate profits and growth took center stage. But a rally later in the week as some “bought on the dip” kept markets from retreating into correction territory.

Further, the index for all items; less food and energy, rose 0.9% in April. Its largest monthly increase since April 1982. Nearly all major component indexes increased in April. 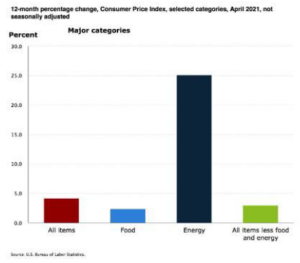 Along with the index for used cars and trucks, the indexes for shelter, airline fares, recreation, motor vehicle insurance, and household furnishings and operations were among the indexes with a large impact on the overall increase.

Companies Talking About Inflation Worries Too

During every earnings season, CEOs of publicly-traded companies talk about topics that impact recent and future earnings and during Q1, inflation was a hot topic. In fact, research firm FactSet searched for the term “inflation” in the conference call transcripts of all earnings conference calls and found that 175 companies mentioned inflation.

The Labor Department’s Job Openings and Labor Turnover Survey – the JOLTS Report – was released on Tuesday and it reported that the number of job openings reached a series high of 8.1 million on the last business day of March. Further:

• Hires were little changed at 6.0 million.

• Within separations, the quits rate was unchanged at 2.4 percent while the layoffs and discharges rate decreased to a series low of 1.0 percent. 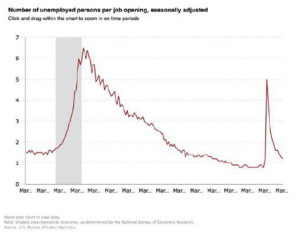