THE S&P 500 HITS ANOTHER ALL-TIME HIGH WHILE NASDAQ RETREATS AGAIN AS UNEMPLOYMENT INCHES UP TO 6.1%

• The U.S. stock markets were mixed again this week, as the large-cap S&P 500 rose to an all-time high with a weekly gain of 1.2%, but it still trailed the concentrated, mega-cap DJIA which gained 2.7% on the week

• The tech-laden NASDAQ dropped 1.5% this week, after having been down close to 4% earlier in the week

• The S&P 500 sectors rotated toward cyclicals, with 4 of the 11 sectors jumping more than 3%, led by Energy which leapt almost 9%, Materials (up almost 6%) and Industrials (up almost 4%)

• It was another busy earnings season, as companies reported their Q1 results; generally speaking, the results were better than expected

• In economic news, most of the coverage was focused on a lackluster jobs report, as nonfarm payrolls increased by only 266,000 in April, whereas experts were expecting closer to 1 million

• The ISM Non-Manufacturing Index for April declined to 62.7% from 63.7% in March, with the Prices component reaching its highest level since 2008 at 89.6%, worrying many that inflation will continue to rise

• Treasury Secretary Janet Yellen said interest rates may need to rise to prevent the economy from overheating, but the markets took her remarks in stride

It was another very busy earnings week and as of Friday, 442 of the S&P 500 companies have reported Q1 results and earnings are generally better than projected – and by a wide margin too.

The week started off with Wall Street and Main Street parsing through the words of Warren Buffett and inflation was on most minds as Buffett commented that the economy was running red hot. Then on Tuesday, Treasury Secretary Janet Yellen suggested that rates might have to rise in order to cool the economy, although she later attempted to walk back her comments. Then Wednesday saw reports that lumber and copper hit new all-time highs.

But Friday’s jobs data tempered worries of a too-hot economy, as the Labor Department reported that nonfarm payrolls came in at 266,000 in April, which was about 25% of what analysts were expecting. That pushed the unemployment rate up just a little bit, as it rose to 6.1% from 6.0%.

With 442 of S&P 500 companies having reported Q1 results as of Friday, more companies are beating estimates for the first quarter than average, and beating those estimates by a wider margin than average. Accordingly, the S&P 500 is reporting the highest year-over-year growth in earnings since Q1 2010 for Q1. And expectations are for double-digit earnings growth for the remaining three quarters of 2021.

• Of the companies that have reported, 86% have reported actual earnings above estimates, which is above the five-year average of 74%.

• If 86% is the final percentage for the quarter, it will mark the highest percentage of S&P 500 companies reporting a positive earnings surprise since FactSet began tracking this metric in 2008.

• In aggregate, companies are reporting earnings that are 22.1% above the estimates, which is also above the five-year average of 6.9%.

• If 22.1% is the final percentage for the quarter, it will mark the second-highest earnings surprise percentage reported by the index since FactSet began tracking this metric in 2008.

The S&P 500 Hits a New High and NASDAQ Retreats

As was the case last week, on the one hand, equity investors were pleased that the DJIA leapt almost 3% and the S&P 500 reached a new all-time high. But on the one hand, investors were disappointed that NASDAQ went the other way, although it did trim its losses towards the end of the week, so maybe that’s somewhat of a silver lining.

The very narrowly focused DJIA was the best of the major U.S. equity indices, whereas NASDAQ turned in one of its worst weekly losses in about 2 months, suggesting that a cyclical rotation occurred (at least for this week). Value stocks outperformed growth stocks for the third week in a row and the 10-year Treasury touched a low not seen in about 2 months. 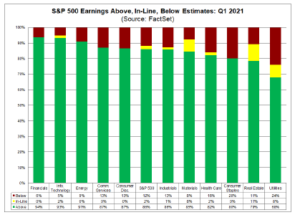 Unemployment Inches Up to 6.1%

On Friday, the U.S. Bureau of Labor Statistics reported that total nonfarm payroll employment rose by 266,000 in April, and the unemployment rate moved up from 6.0% to 6.1%. The BLS reported that notable job gains occurred in leisure, hospitality, and local government education and notable declines were in temporary help services and couriers.

Further from the BLS press release: