• Markets had a pretty good week, as the S&P 500 kept flirting with new all-time highs and the tech-laden NASDAQ and small-cap Russell 2000 made some big jumps

• The mega-cap, 30-stock DJIA on the other hand, gave back some gains and retreated 0.8% on the week

• WTI Crude Oil ended the week north of $70/barrel, which is just about double where it was this time last year

• Volatility was fairly even most of the week, before a brief spike on Thursday until it declined later that day and into Friday

In economic news, most of the headlines were focused on inflation numbers hitting 13-year highs, but Wall Street’s reaction was somewhat muted given assurances from the Federal Reserve that they would keep monetary policy highly accommodative for “some time” and that the recent jump in inflation would be temporary.

And Wall Street was pleased that Consumer Sentiment showed that the country is expecting prices to rise this year by about 4%, as overall sentiment jumped relative to May’s reporting. But the Consumer Sentiment data also contained a few nuggets of worry.

Consumer Sentiment Up, But There Are Some Worries

On Friday, the University of Michigan reported that Consumer Sentiment rose in early June, recouping two-thirds of May’s loss. From the release:

“The early June gain was mainly among middle and upper-income households and for future economic prospects rather than current conditions. Stronger growth in the national economy was anticipated, with an all-time record number of consumers anticipating a net decline in unemployment. Rising inflation remained a top concern of consumers, although the expected rate of inflation declined in early June.

Spontaneous references to market prices for homes, vehicles, and household durables fell to their worst level since the all-time record in November 1974 (see the chart). These unfavorable perceptions of market prices reduced overall buying attitudes for vehicles and homes to their lowest point since 1982.

• In all 3 of those industries, output fell more than 55 percent.

• Productivity increased in 5 industries where declines in hours worked exceeded the decrease in output. In all of those industries, output fell more than 10 percent.

• Hours worked decreased in 14 out of the 16 industries which recorded increases in productivity.

Of these, the largest declines in hours worked were in gambling industries (-32.8 percent), drycleaning and laundry services (-19.5 percent), and line-haul railroads (-16.3 percent); the other 11 industries had hours worked declines of 11.7 percent or less

Statistics on trade in goods and services by country and area are only available quarterly, with a one-month lag. With this release, first-quarter figures are now available.

• The deficit with China increased $15.4 billion to $91.4 billion in the first quarter.

• The deficit with Mexico decreased $7.3 billion to $27.9 billion in the first quarter. 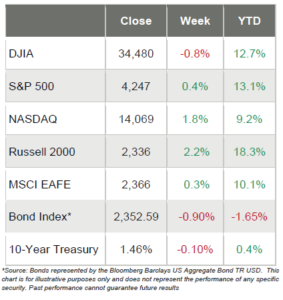 A 10 basis point decline in the 10-year Treasury fueled the growth names, as the S&P 500 kept teasing new record highs while the technology-stuffed NASDAQ and the smaller-cap Russell 2000 made some big gains.

Overall it was another light trading week, as it was during last week’s holiday-shortened trading time, but the tech names rallied again to mark their fourth consecutive weekly gain. 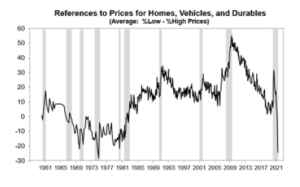 Spontaneous references to market prices for homes, vehicles, and household durables fell to their worst level since the all-time record in November 1974 (see the chart). These unfavorable perceptions of market prices reduced overall buying attitudes for vehicles and homes to their lowest point since 1982.

These declines were especially sharp among those with incomes in the top third, who account for more than half of the dollar volume of retail sales. Fortunately, in the emergence from the pandemic, consumers are temporarily less sensitive to prices due to pent-up demand and record savings as well as improved job and income prospects.

The acceptance of price increases as due to the pandemic, makes inflationary psychology more likely to gain a foothold if the exit is lengthy. While expansive monetary and fiscal policies are still warranted, the accompanying rise in inflation will cause uneven distributional impacts. Those impacts have already been noticed in June among the elderly and lower income households. A shift in the Fed’s policy language could douse any incipient inflationary psychology, it would be no surprise to consumers, as two-thirds already expect higher interest rates in the year ahead.”

Exports Up, Imports Down

“On Tuesday, June 8th, the U.S. Department of Commerce reported that the goods and services deficit was $68.9 billion in April, down $6.1 billion from $75.0 billion in March. 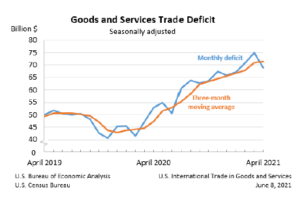